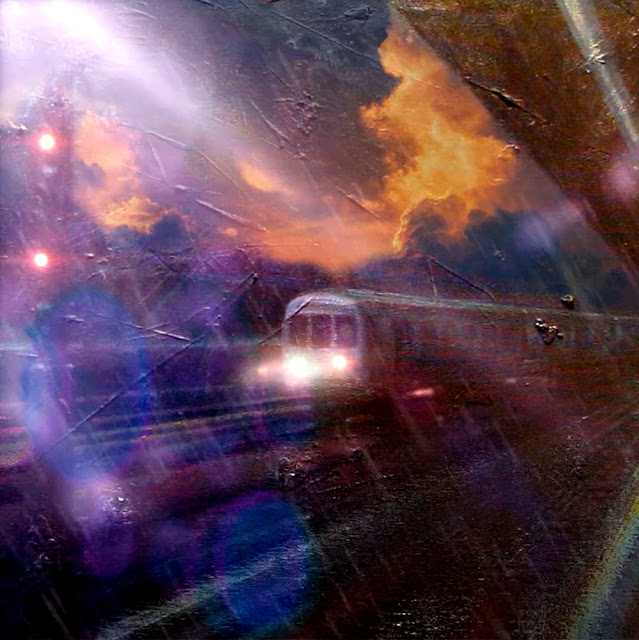 "Getting There" 2021, Acrylic paint on canvas, digital paint, and animation.
Linder's work titled "Getting There" is at the center of a news story that broke this week. The article is in the Times Business News and later picked up by Crypto Insiderz and the Boston Herald among many others. Linder's painting "Getting There" is part of a series of artwork that was released last year as an NFT crypto art collection titled The Unforgiving City.

Non-Fungible Tokens (NFTs), have been having a great run in the past few years as the sector has exploded. Millions of buyers from around the world have been quietly joining the NFT sector with cheap purchases, which sometimes turn out to be quite valuable.

An NFT is essentially a digital collectible; their explosion onto the main stage portends great things for the creative industry. NFT first came into the public eye in early 2021. Since then, some collections have sold for hundreds of millions of dollars. While the number of NFT purchases has been growing by millions, many experts believe there is still huge growth potential.

With so much growth potential, the present time is the best time to find hidden gems in the crypto sector. One such example is NFTs created by artist Allan Linder. Initially, his NFT artwork was sold for 0.03ETH, which was around $85 at the time. The art was sold to a collector based in Canada who relisted it and managed to sell it for $2.8 million.

One major reason why the art was so undervalued was that the artist was new to the NFT industry. As such, his art was not known in NFT circles. However, a collector quickly identified the potential and made a killing on resale.

This was not his first sale of digital NFT art. However, none of his other collections has grown in value so much in the past. The art piece that was resold for millions was titled “Getting There” and was part of a series known as The Unforgiving City Collection.

About The Unforgiving City Collection

The Unforgiving City is an NFT collection based on original Cityscape paintings created by Allan Linder. Each piece was scanned at 4K resolution and digitally painted over. The digitally enhanced art pieces were then animated with 20 to 100 animated cells. It was then restacked, stabilized, and an original music score was added to it.

His unique art style entails combining real-world artwork with digital creations that fuse the texture from painting with motion animation, and digital overlays. The work has been described as “Living Paintings” in some circles.

Who is Allan Linder?

Allan Linder has been an artist for the past 25 years. During that time, he has won various awards, in multiple disciplines for his original creations. He has experience creating storyboards for television and films, animation, illustration, painting on canvas, and character design.

Allan Linder’s digital NFT art has been receiving praise across the NFT world for a while now. It is only a matter of time before the collection becomes the next big hit in the NFT world. His unique art creations could end up becoming as valuable as Beeple’s artwork.