'Conan the Barbarian' TV Show in the Works at Netflix 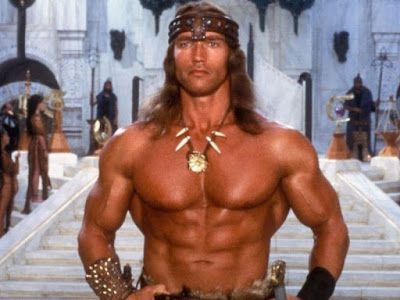 Netflix's next ambitious television project will be a series adaptation of Conan the Barbarian. Robert E. Howard created the iconic character in 1932 and has been the basis for two Arnold Schwarzenegger movies, a 2011 film starring Jason Momoa and a short-lived 1990s TV series. The new project still does not have a writer or showrunner, but Fredrik Malmberg and Mark Wheeler serve as executive producers.

The project comes from Malmberg and Wheeler's Pathfinder Media, reports Deadline. It is part of a deal between Netflix and Conan Properties International, owned by Malmberg's Cabinet Entertainment. The deal will allow Netflix to develop other Conan projects, including live-action and animated movies and shows. The streamer will also have access to the full Conan literary library for adaptations.

Howard's Conan the Barbarian, or Conan the Cimmerian, debuted in a 1932 issue of Weird Tales magazine. The stories inspired the Sword and Sorcery genre. The franchise has grown to include 100 novels, video games, thousands of issues of comic books, toys, and two animated series. In 2018, a Conan series was in the works at Amazon, although it never materialized.