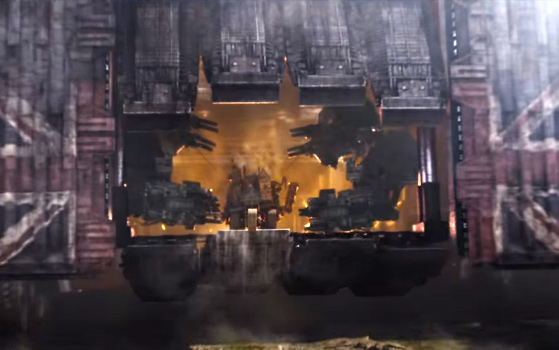 . Mortal Engines is the first book in the series that focuses on a futuristic, steampunk version of London, now a giant machine striving to survive on a world running out of resources. The book has won several awards. (Teaser at the bottom of the page) 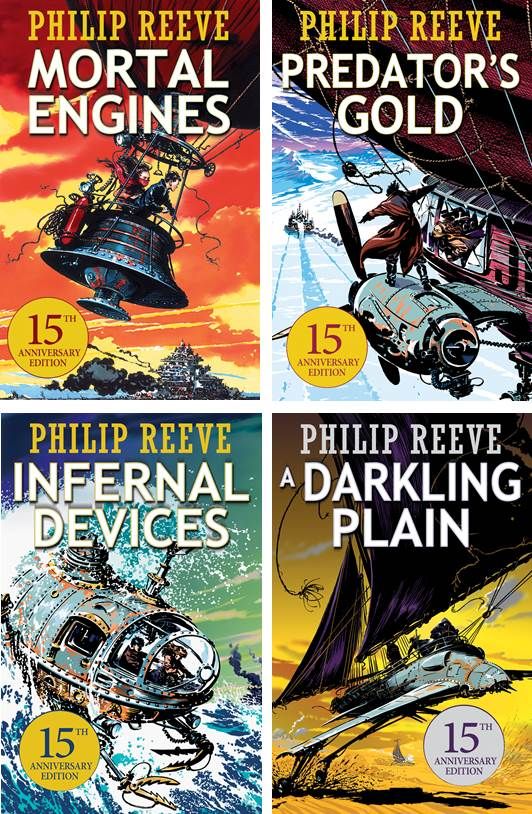 The book is set in a post-apocalyptic world, ravaged by a "Sixty Minute War", which caused massive geological upheaval. To escape the earthquakes, volcanoes, and other instabilities, a Nomad leader called Nikola Quercus installed huge engines and wheels on London, and enabled it to dismantle (or eat) other cities for resources.

David Wyatt and Philip Reeve have also been collaborating on a graphic novel version of the story.

The technology rapidly spread, and evolved into what is known as "Municipal Darwinism". Although the planet has since become stable, Municipal Darwinism has spread to most of the world except for Asia and parts of Africa. Much technological and scientific knowledge was lost during the war.

This is more of David Wyatt illustrations for the Philip Reeve's story.

Because scientific progress has almost completely halted, "Old Tech" is highly prized and recovered by scavengers and archaeologists. Europe, some of Asia, North Africa, Antarctica, and the Arctic are dominated by Traction Cities, whereas North America was so ravaged by the war that it is often identified as "the dead continent", and the rest of the world is the stronghold of the Anti-Traction League, which seeks to keep cities from moving and thus stop the intense consumption of the planet's remaining resources.

Thousands of years after civilization was destroyed by a cataclysmic event, humankind has adapted and a new way of living has evolved. Gigantic moving cities now roam the Earth, ruthlessly preying upon smaller traction towns. Tom Natsworthy (Robert Sheehan)—who hails from a Lower Tier of the great traction city of London—finds himself fighting for his own survival after he encounters the dangerous fugitive Hester Shaw (Hera Hilmar). Two opposites, whose paths should never have crossed, forge an unlikely alliance that is destined to change the course of the future. Mortal Engines is the startling, new epic adventure directed by Oscar®-winning visual-effects artist Christian Rivers (King Kong). Joining Rivers are The Hobbit and The Lord of the Rings trilogies three-time Academy Award®-winning filmmakers Peter Jackson, Fran Walsh and Philippa Boyens, who have penned the screenplay. The Universal and MRC adaptation is from the award-winning book series by Philip Reeve, published in 2001 by Scholastic. On board as producers are Zane Weiner (The Hobbit trilogy), Amanda Walker (The Hobbit trilogy) and Deborah Forte (Goosebumps), as well as Walsh and Jackson. Ken Kamins (The Hobbit trilogy) joins Boyens as executive producer. Universal will distribute the film worldwide. www.mortalengines.com